All of the behaviors above are activities or actions that are expected of students. However, students who constantly engage in these behaviors can disrupt the learning environment or monopolize class discussions and teacher time. In these cases, differential reinforcement of low rates of behavior (DRL) is an appropriate intervention. Whereas DRO is helpful in situations in which teachers want to eliminate a behavior, DRL works to reduce the occurrence of an otherwise appropriate behavior.

To implement DRL, a teacher delivers reinforcement when the frequency of an unwanted behavior is reduced during a given period of time. Because the behavior is appropriate for the classroom, the goal is not to eliminate it entirely but rather to increase the intervals between instances of the behavior.

Click on the audio links below to hear Joe Wehby’s tips for using DRL in the classroom. You may find it helpful to follow along in the “Steps for Using DRL” box below as you listen to the audio. Again, a DRL is a nice strategy, particularly when you’re thinking about students who might show some of those early signs in the acting-out cycle of fidgeting, or talking out, or engaging in other activities that might be destructive to instruction that if you simply reprimanded might lead to an escalation, to a more serious form of behavior problem. A DRL will allow you to reduce the level of those very early signs to an acceptable point to where, then, the behavior can be managed on a less-frequent basis and one that would be acceptable and would match the levels of other students in the classroom and would meet the expectations of the teacher during that particular instructional period.

Steps for implementing a differential reinforcement of low rate procedure would be as follows. First, the teacher would identify the frequency in which the problem behavior was occurring. Again, if we’re using the example of talking-out in class or raising the hand too frequently, the teacher may say that during her reading class this occurred 15 to 20 times during a 15-minute class, which again was providing little opportunity for the teacher to interact with any other student. But hand-raising or asking for assistance is not a behavior that the teacher would like to extinguish totally, so the teacher would then identify at what level would she like the student to perform the behavior. It might be that she would want that student to raise his or her hand three times during the 15-minute reading time period. So what the teacher would then say, “I want to start from the level the student’s currently performing at to the level which I want him to be performing that particular behavior.” So she would gradually reinforce the student for doing less of the behavior. If the student was calling out answers 15 times during a 15-minute reading time instruction, she may want to say, “I want him to get that down to five.” So she would gradually reduce that from 15 to 12, and if the student reduced his rate from 15 to 12 during two or three days of instruction, each day he met that goal he would receive a reinforcement. Once he’s stabilized, or is able to maintain that level of 12 for a certain period of time, then the teacher then may reduce the level from 12 to 9, and again, the same requirements would be in place. If the student met his goal of only talking out or only calling out answers nine times during the reading instruction, he would get reinforcement for that particular period. If he didn’t meet his goal, if he exceeded that, he would not get public acknowledgement or whatever reinforcement strategy the teacher may choose to implement to reinforce the behavior.

The key to DRL is for the teacher to gradually reduce the frequency of the behavior. Here are some other points to keep in mind: 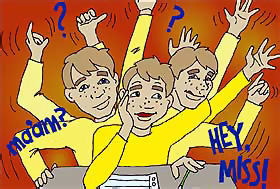 By using differential reinforcement, Ms. Rollison has finally eliminated Patrick’s rude comments during class. Now she’s decided to focus on his hand-raising/ calling-out behavior. As you heard earlier in this module, Ms. Rollison has collected baseline data that shows Patrick’s hand-raising and calling-out occurs anywhere from 20 to 36 times per period. She decides to implement a DRL procedure to decrease the number of times he tries to respond during class. Here is the DRL procedure she and Ms. Thibodeux developed together.

Click the audio icon to hear some additional thoughts from Ms. Thibodeaux regarding this DRL procedure for Patrick (time: 1:12).

I think this DRL procedure is going to be successful with Patrick for several reasons. First, his success in refraining from making rude comments shows he responds well to differential reinforcement techniques. Second, the schedule that Ms. Rollison has set regarding the expected rates of performance involves a gradual decrease, rather than a sharp drop in behavior. This is a schedule that Patrick should be able to meet without frustrating either him or Ms. Rollison. Third, she has talked with Patrick about the behavior and enlisted his suggestions for reinforcement. Students tend to work harder towards something they have selected themselves. Lastly, her final goal is a hand-raising rate that’s about on par with that of the other kids. So she hasn’t eliminated the behavior entirely, because she does want him to continue to raise his hand and answer questions. But she’s reduced it to a level commensurate with the other kids.