What is the pre-referral process? 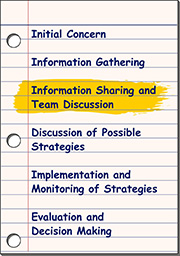 Once all of the relevant information has been collected, the next stage of the pre-referral process, information sharing and team discussion, can begin. In this stage, the team actually meets to begin its review of the information collected to date and to start discussing ideas and interventions—including type and intensity—that may help the student.

Typically, pre-referral teams are composed of a diverse set of individuals (e.g., general education teacher, school counselor, reading specialist) who have experience using and designing instructional techniques to address the needs of students. To establish a collegial atmosphere, team members share information in an effort to promote student success in general education classrooms. The number of people on the team varies depending on the needs of the student being referred; however, each person on the team should have a contributing role.

Click here to view the roster of a typical pre-referral team.

In order to ensure that pre-referral meetings run efficiently, it may be necessary for the team to assign additional roles to its members. These might include a facilitator, note-taker, timekeeper, or meeting coordinator.

Mrs. Marks shares her major referral concerns about Jeremy (i.e., that he doesn’t turn in his homework, that he doesn’t focus on his independent work, and that he is frequently inattentive in class) with the team, and explains how these behaviors are interfering with his progress.

The team consists of Jeremy’s mom, the school counselor, Mrs. Marks, and several of Jeremy’s other teachers. At this point the team does not require the involvement of a school administrator or the school psychologist, though they may join the team later if the need arises. The group discusses Jeremy’s strengths (e.g., he is compliant, loves music, and is a leader in band class) and reviews the data that Mrs. Marks has collected. They talk about whether there were other issues that might be interfering with Jeremy’s performance, such as attendance or changes in his home environment. Reports from other teachers support Mrs. Marks’s concern and further indicate that this problem is not isolated to her classroom. Once everyone has discussed the issues and agreed on the priorities, the team defines their top concern as:

Turning in homework on time. “On time” is defined as “on the day it was due”; at present Jeremy is only turning in 60% of his homework, and most of the time it is turned in late.

In addition to considering factors about the student, the team should reflect on any external issues that might be influencing the student’s performance or behavior. For example, the team might try to ascertain whether or not the concern is due to: