In the United States today, a significant number of students speak English as a second language. Despite their growing numbers, however, many teachers may feel unprepared to provide instruction for students with a variety of language needs or who are at different stages of mastering English. One way to alleviate this uncertainty is for instructors to learn the basic tenets of second-language acquisition.

English as a second language

Over time, a number of terms have been used to describe students who are learning English. The term used by the United States Department of Education, the federal agency that ensures equal access to education and promotes educational excellence throughout the United States, is Limited English Proficiency (LEP). Others include:

Although No Child Left Behind (NCLB) requires teachers to be highly qualified in their area of instruction, it does not oblige teachers to receive specific training in how to teach students whose first language is not English. Despite this, some states believe that all teachers, regardless of their area of instruction, should be knowledgeable about working with English learners. These states require that—in order to be highly qualified—teachers be prepared to help their linguistically diverse students to master English.

Second language proficiency develops incrementally, somewhat like first language development. Teachers who have an understanding of the developmental language stages are more likely to be able to provide appropriate and differentiated instruction to English learners. See the table below for an overview of the stages of second language acquisition.

As students progress through these stages, they develop two types of language proficiency: social and academic, often referred to as BICS and CALP.

Basic Interpersonal Communicative Skills (BICS)—Refers to a student’s ability to understand basic conversational English, sometimes called social language. At this level of proficiency, students are able to understand face-to-face social interactions and can converse in everyday social contexts. These social language skills—generally acquired in approximately two years—are sufficient for early educational experiences but are inadequate for the linguistic demands of upper elementary school and beyond. Students acquire this social language by interacting with their peers, family members, and playmates. For example, Maria, who has lived in the United States for only a few months, is already able to understand her peers when they ask her in the cafeteria, “Maria, do you want to sit with us?” Maria has learned this so quickly because her peers ask her the same question on a daily basis and use physical gestures to help her to understand.

Cognitive Academic Language Proficiency (CALP)—Refers to a student’s ability to effectively understand and use the more advanced and complex language necessary for success in academic endeavors, sometimes referred to as academic language. Students typically acquire CALP in five to seven years, a period during which they spend a significant amount of time struggling with academic concepts in the classroom. A student like Maria, who has only been in the United States for a few months, may find it difficult to understand the content-related terms (such as “photosynthesis”) discussed during Mr. Bennett’s science lesson. She may also struggle with instruction-related terms such as “compare and contrast.” Finally, her difficulty may be compounded by the fact that she may not have learned these concepts in her first language. 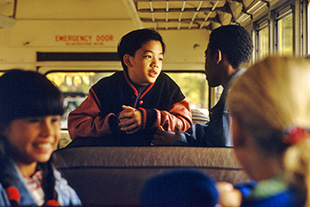 Because teachers are often unaware of this distinction, they sometimes misinterpret the fluent English their students use when speaking to their peers as an indication that those students are English-proficient. When those same students struggle academically, teachers often discount language as a factor. This lack of knowledge about social and academic language often leads to inaccurate assumptions about a student’s ability, potentially resulting in:

Listen now as Clint McDougal talks about Maria and her comfort with using newly acquired English during play (time: 0:55).

Maria probably uses social English on the playground with English-speaking friends. It comes much quicker because it’s within an embedded context. It’s not very technical. They hear repeated comments, such as, “Would you like to swing today?”, “Let’s go play on the slide,” “Can I have a stick of gum?”, “What are we going to do this afternoon after school?” and they’re with peers. Maria feels very comfortable, which would explain why she uses a lot of English on the playground as opposed to when she returns to the classroom, which is the realm of academic English where the teacher might be discussing social studies concepts, things like elevation and climate, or latitude and longitude. And these are words that Maria has probably never heard even in her home language, much less in English. And there’s a shyness or a reticence to engage in the classroom when she’s very unaware of the concepts, especially if they’re concepts that are not concrete but fairly abstract.

Mrs. White, a colleague of Mr. Bennett’s, feels uncomfortable when she hears students speaking in another language with their siblings or friends at school. She finds it frustrating and inappropriate because she does not know what they are saying. During a staff meeting, however, Mrs. White learns that when students are not allowed to use their native language, they are deprived of a key component of their heritage. Mrs. White decides that the next time she hears them she will try not to think of it as inappropriate.