What strategies can educators implement to prevent or address challenging behaviors?

What strategies can educators implement to prevent or address challenging behaviors? 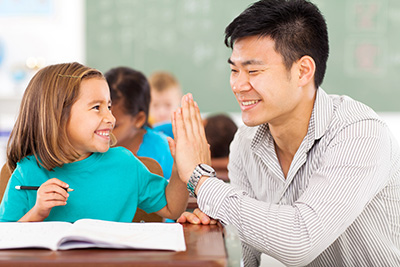 A strategy used to increase positive behaviors. Feedback is given to a student following a desired or positive behavior which increases the likelihood that the student will engage in this behavior in the future.

Although there are several types of differential reinforcement, we will explore differential reinforcement of alternative behavior (DRA), one of the most common types. DRA reinforces a positive alternative behavior that is a replacement for the undesired or challenging behavior. This increases the occurrence of the desired behavior which, in turn, decreases that of the undesired behavior.

To help educators address challenging behavior, the table below describes the steps to implement differential reinforcement of alternative behavior and provides an example.

When implementing this strategy, consider how you will check to make sure that the student is engaged in the alternative behavior. Depending on the behavior, you will use one of the options below.

In addition to the steps listed above, the four actions below can be helpful when implementing this practice.

Before implementing differential reinforcement, collect data on the undesired or challenging behavior to determine how often that particular behavior is occurring. Then collect data after implementing the strategy for a while (e.g., a couple of weeks). This can help you:

Collecting data may be difficult for teachers, especially if they are trying to do so during teacher-led whole-group or small-group instruction. In such instances, it may be helpful for another adult (e.g., paraeducator) to collect the data.

Educators should think about using the three types of positive consequences, or reinforcers: tangible (e.g., stickers, tokens), social (e.g., thumbs up, verbal praise), and activity-related (e.g., extra computer time, drawing). Each student is different and the type of reinforcer that will prove effective may differ from one to another. They might also change over time. For these reasons, it is important that teachers talk to their students to learn more about their interests and preferences and revisit this conversation throughout the year. Additionally, educators should try to explicitly tie the reinforcer to the likely function of the behavior. For instance, if a student engages in an undesired behavior for attention (e.g., making noises during whole-group instruction), the educator may want to use a social reinforcer (e.g., behavior-specific praise) so that the student receives attention for the desired behavior (e.g., listening attentively during whole-group instruction).

A means by which teachers increase the probability that a desired behavior will occur in the future; often referred to as a reinforcer.

Give students the opportunity to provide feedback on the strategy. Some may have ideas for alternative behaviors that are appropriate but also more appealing to them. Others may need more frequent reinforcement (e.g., every five minutes instead of every ten minutes). All differential reinforcement means is that there is a different effect of one behavior relative to the effect another behavior produces. One behavior pays off more immediately or in a bigger way or in a better way. So, for example, in the classroom, if a student says, “Give me that!” and a peer is more likely to hand the item over than if the peer says, “May I please have a turn?” then we might see the student grow to rely on making rude demands versus requesting politely. That’s an outcome of differential reinforcement. Understanding this helps us understand how to arrange the situation so that we’re more likely to see desirable behavior.

So differential reinforcement of an alternative behavior (DRA) rests on this idea that two or more behaviors have a different payoff. During DRA, a teacher intentionally reacts differently to the more desirable behavior based on its ability to meet the same need as the undesirable behavior, but it needs to pay off better so that it can replace the less desirable behavior. For example, I had a student who would engage in low-intensity behavior: tapping, shuffling his papers around. But that could escalate all the way up to physical aggression, which was dangerous. And this happened when I wasn’t readily available to help him get started on particular assignments. So I taught the student through both explanation and direct experience that if instead he raised his hand or said, “Excuse me,” I would immediately hustle to his side to help him get started on the task. Now, no teacher can do that forever—nor should they—because ultimately, we want students to be able to independently initiate work whether they need help or not. However, it was super important to establish very clearly that the alternative behaviors worked better than the disruptive tactics that student had previously been relying on to obtain support from teachers. From that point, we could work on developing his tolerance for delays to a teacher response. And we could do that by systematically changing how quickly or often I responded to a hand-raise, gradually increasing the delay. And, as an aside, it was very important that I was transparent with the student about what I was doing. And also, why it would ultimately help him meet his goals. “I’m going to start not coming right away. There’s going to be a little wait, just see what you can do. And the reason we’re doing this is because you’re going to be safer and be better prepared with skills to do the kinds of work you want to do.”

In addition, using this DRA procedure created space to tackle other critical skills for the student, such as meeting academic deficits or initiating tasks independently. At the end of the day, DRA is about developing a student’s skills. Instead of simply trying to eliminate a difficult behavior, we’re thinking about why that difficult behavior is occurring, asking ourselves what a better way is for the student to get their need met, and making sure it’s very clear to them what they can do instead. You do all of this with a clear plan in mind for fading supports gradually to help students grow into the most successful and independent learners they can possibly be.