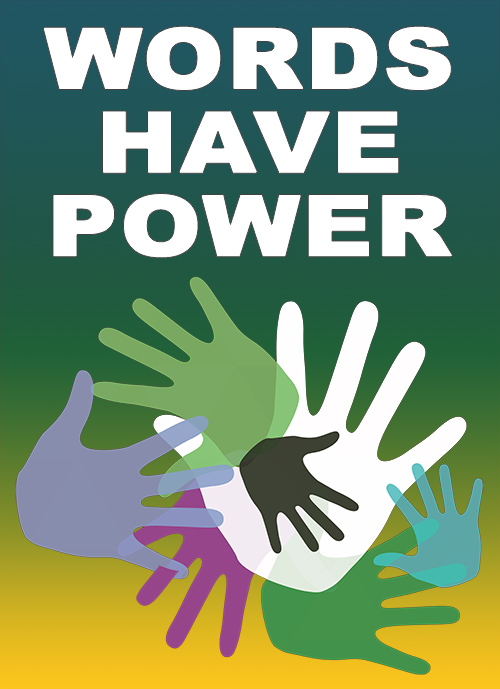 The language we choose to express ourselves conveys meaning, but it also communicates attitudes, perceptions, and emotions. For example, there are a number of words to describe someone who is quiet or reserved in social situations: introverted, shy, aloof, bashful, timid, diffident. If you were such a person, which of those terms would you prefer others use when referring to you? Do any of these words carry a more positive or negative connotation than the others?

Among people with disabilities and their families, language is an especially important issue, particularly as pertains to the use of positive terminology. Over time, language shifts and changes. Words that were once considered inoffensive or neutral may later take on meanings or connotations that are no longer considered acceptable or are even regarded as offensive. For example, we no longer refer to people with mobility issues or who use a cane as “crippled.” In other cases, the order in which words are placed or spoken is problematic. Disability advocates prefer the use of “a person with a disability” because the once-common “disabled person” places greater emphasis on the disability than on the individual.

Place the individual before the disability.

Use current terms rather than those that are outdated, negative, or derogatory.

Use of positive or neutral descriptions

Use terms that reflect positively on the person, rather than those that convey negative assumptions or judgments. For instance, a person who uses a wheelchair considers it a tool that provides him with greater mobility, and not as something to which he is confined. Ironically, he would be more confined without the wheelchair to get him from place to place.

As with any rules or guidelines, there are exceptions to the use of people-first language. Individuals who are blind or Deaf are often referred to as blind individuals or Deaf individuals, particularly for those in the Deaf community, which has its own language (American Sign Language) and culture. Similarly, many individuals with autism refer to themselves as autistic or as autistic individuals.

Lance Smith, who you met on Page 1, addresses the issue of language and terminology in his poem, Special Needs World, which he performs in the video below (time: 1:42).

My brother Taylor has Angelman Syndrome,
a depletion of the fifteenth chromosome,
which is all scientific mumbo-jumbo to say
that he is not the same

He can’t talk and, yes, he rides
the short bus,
you know, the one the rest of us make fun of
And he gets off that bus to go to that
special class
Yes, the one you would pass
and look inside, seeing a kid
go for a ride in a wheelchair
while you stare at his hair
because it looks like he cut it himself

And he probably did, because raising
a handicapped kid is hard
Sometimes it’s like having a toddler in the body
of a twelve-year-old
He’s big and bold
and can’t be told
to get down off the TV

My brother Taylor was always into something,
if not that then one thing
like a bull in a china shop
He can’t stop
because he is who he is
My brother has deficiencies
It’s not a disease,
so please
don’t give him your sympathies
If anything, he’ll give you his
You’re the one who’s having trouble
understanding his situation
All the while he sits
and smiles,
thinking of his evaluation of you

My brother knows nothing
of the problems of this world
like war, poverty, famine,
religious contention,
or social ascension
He can’t comprehend that we can’t
mend something like racism
It’s not of his world,
and the only problem that faces him
is when he gets to open his
Christmas presents

So the next time you think
of the problems
and difficulties
that everyone on Mother Earth must tend to,
remember who thinks you are only here
to make him smile,
my brother Taylor and his
simple life style

Take some time to think about the following scenarios:

How would you approach these situations? Would you handle them differently? Why or why not? Discuss this situation with others in your class. Can you think of several different ways to respond?

At one point in history, mental retardation was a clinical term used to refer to people with a specific set of characteristics. Over the years, variations on this term (e.g., retard or retarded) were used in a derogatory way to insult or to demean others. Used this way, these thoughtless and hurtful terms reflect negative stereotypes about people with intellectual disabilities.

Now, over 200 organizations like Special Olympics and Best Buddies have joined forces to end the use of the “R-word.” You can learn about their campaign, pledge to eliminate the use of these terms, and find more ways to be involved in this movement at r-word.org.

You might have noticed that Lance uses some terms in his poem that do not reflect people-first language. He did so purposely to draw attention to the issues of language and labels. In the audio interviews below, Lance and his mother Leona offer their insights about the use of disability related terms and labels. Well labels matter. They matter because we make the labels matter as a society. And there’s a lot of controversy about what you call someone with special needs, and you know there’s the R-word now and before it was just a fact. I specifically put the word ‘retarded’ in the piece because I don’t want us to run away from it. And I don’t think it’s fair that someone who uses it in a derogatory term should sort of make it demeaning or take power away from someone.

The people born with special needs are born into their own universe. But parents have to adjust and that’s the first thing they have to do is learn their child has a label. I believe that the labels we use matter, but it’s also where it’s coming from, how we’re using it. And then at the end of the day how you’re using it and then it doesn’t matter what you’re saying. I say my brother has special needs. He is mentally handicapped. I don’t necessarily say “retarded,” not that I’m ashamed of that but other people don’t understand the connotation or they hear it in a negative tone now. Society has taken that word and it’s something else. That’s just a factual word the way I see it, but you know labels are for other people.

Before we had Taylor I never gave thought to when somebody would just loosely say, “Oh, you act so retarded.” It’s loosely saying it because I don’t think that they’re really in their mind comparing you, if you do something silly or goofy, that you’re acting like someone with Angelman Syndrome. So, those terms are very loose. But then after we had Taylor we would hear that and I think his dad, Jim, I saw him first take the offense. He said, “I really wish that you wouldn’t do that. There are children with special needs who know that they have special needs.” And so I think that if we watch what we say then we won’t offend any of these children.

At one time I said to someone, “This is Taylor. Taylor has Angelman Syndrome.” And I gave them the characterizations: the non-speech and giggling, inappropriate laughter. I did say, “Well, he’s mentally retarded.” But my sister noticed. She said, “When you said that, he looked down and his eyes kind of drooped.” And I thought, “Well how much does he understand what I’m saying since he can’t communicate verbally?” So we try to be careful with that, not just because of Taylor and because of the way that we would perhaps be perceived, but we have to be cognizant for other children as well.