How can teachers encourage and reinforce expected behaviors? 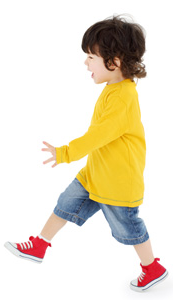 Once a teacher has identified the school’s behavior expectations, she can begin to develop rules for her classroom and other school settings (e.g., playground, cafeteria, bathroom). Recall that rules are used to clarify expectations for specific settings. Further, rules help establish boundaries for young children so they can be safe and successful in their early childhood environments.

There are several guidelines that teachers should follow when they craft rules for early childhood settings. Rules should:

Be positively stated: It is always more desirable to tell children what to do rather than what not to do. For example, a rule stating “Use gentle touches” is more appropriate than one that simply says “Don’t hurt other children.” Clearly stating what you want children to do ensures that children know the expected behavior. This sets the stage for children’s success.

Be few in number: There should be no more than five rules for each setting. This is especially important because children have to learn the rules for multiple settings. Rules also should stay the same across settings, when possible. For example, the rule “Use quiet voices” is applicable in a variety of settings.

Be simple and specific: Rules should be stated clearly, in as few words as possible, and using developmentally appropriate language. For example, “Use your inside voice” is more appropriate and understandable for this age group than “Talk quietly when you are inside the school.”

Term defining an instructional tool, strategy, or practice that is tailored to the age of a given child, his or her individual needs and abilities, and his or her cultural and social norms and expectations.

Be measurable and observable: As mentioned above, rules are more narrowly defined than are the broader behavior expectation. Teachers need to make sure that any adult working in the setting can determine whether the rule is being followed. To do this, teachers need a clear definition for what each behavior looks like in his or her classroom. For example, “Use kind words” is more easily observed and measured than “Be respectful.” Ideally, classroom rules should be developed with children’s input. The type of involvement children will have depends on their developmental abilities. Below are several strategies for involving children in developing and introducing the rules, ranging from the most to the least amount of active involvement.

Rules should be developed for all settings relevant to the children. Teachers need to consider settings other than the classroom (e.g., playground, cafeteria, library) and should involve other school personnel in developing rules for the settings in which they work. This is important because other school personnel are often the ones who know the setting best and who are likely to be the ones to encourage children to use the rules there. This is also crucial to getting these stakeholders to buy in to the process, further ensuring consistency across settings and people. Teachers also need to consider different areas within the classroom (e.g., art center, sensory center, dramatic play, circle). Below are links to sample rules for typical preschool settings.

Teachers should handwrite or print each rule next to the corresponding visual. This helps promote early literacy skills. Teachers can also include the home languages of children on the rules poster, something that demonstrates respect for the child’s home language and supports dual-language learning.

Once the rules are developed, they need to be displayed so that teachers and children can refer to them throughout the day. There are two key guidelines for displaying rules in early childhood settings. Rules should:

Include a visual to illustrate each rule: Young children, who typically are not yet reading, need to be able to quickly reference the rules, without being expected to memorize them. Even older children, who can read, should be given illustrated rules to ensure that they can easily and efficiently reference them when needed. Children who are dual-language learners might especially benefit from visual supports. Visual supports can take many forms (e.g., photographs, picture symbols, written words, clipart, line drawings, physical objects). There are also commercially available software programs and apps that can assist with illustrations. The type of visual support used should be based on the needs and abilities of the children in the class. Some children respond better to photographs of themselves and their peers engaging in the rules, while others prefer line drawings. Teachers can combine different types of visual supports (e.g., photographs and line drawings) to accommodate a variety of needs and abilities. Click for examples of visual supports based on the needs and abilities of children.

Based on their needs and abilities, some children benefit from visual supports.

There are a couple of really important things to make your rules meaningful for kids. One of the things that I think is top of my list about rules is to keep them positively stated. We always want to be telling kids what to do rather than what not to do. I also think that keeping them few in number so that kids can remember them, so that they’re meaningful throughout the day. My rule of thumb is to stay between three and five rules, so that those are always things that can be in the front of their mind. They can remember them in lots of different centers throughout the day. I also think it’s really important to have them posted, to have visual representations of what those rules are so that kids don’t have to just remember them but that you can refer to them throughout the day. You can use your words to say, “Remember the posted rules over there.” You can just point to things. You can pull pictures off the walls and show kids. It’s really valuable to have that resource in the classroom to use with them. When you’re developing rules, making them really concrete for your kids to understand—whether you work in an environment where you have some broad expectations things like: Be respectful, be responsible, be safe—you want to make sure that you have defined those in ways for kids that are really concrete. So what does it mean to “be respectful,” what does it mean to “be safe,” what does it look like with our hands and feet being safe in the classroom? So any way that you can make it concrete and really understandable for kids.

Mrs. Rodriguez thinks she knows which rules are important for her classroom. However, she also wants to involve her children in helping to generate them, so she begins the next school day with a large-group discussion about behavior expectations. She shows her children a poster of the school-wide expectations and reads them aloud.

She says, “We’re going to talk about what each of these expectations means for us, and then we are going to make our own classroom rules!”

This begins a lively conversation about appropriate classroom behavior. Jerry is one of the first children to offer input for a new classroom rule. He says, “At school, you can’t hit people and push them and take their stuff.”

Mrs. Rodriguez responds, “That’s right! At school, you have to use gentle touches so people don’t get hurt.”

As the discussion continues, Mrs. Rodriguez uses easel paper to jot down the rules the children generate.