Think back to the Challenge at the beginning of this module and to the problem behaviors that Joseph was exhibiting—smart-aleck comments, rude remarks, teasing. Ms. Rollison has been unsuccessful in changing Joseph’s disruptive behavior, so she decides to seek help from her school’s pre-referral intervention team (i.e., the S-Team). She explains to the team members the various behavior management techniques she has implemented so far, and shows them the data she has collected. Ms. Thibodeaux, a special education teacher and member of the S-Team, suggests that—in situations when basic classroom management techniques and behavioral interventions are ineffective at addressing challenging behaviors—it is often helpful to take a closer look at a student’s behavior. The S-Team discusses whether it would be appropriate to conduct a functional behavioral assessment (FBA). 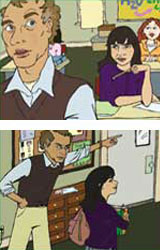 An FBA is used to determine the function of the behavior and the factors that maintain it. It helps teachers to understand the reason(s) (i.e., the function or functions) for a student’s behavior and then to use this information to design an intervention that will help the student learn a new, more acceptable method of getting what he or she wants. In many cases, challenging behaviors are an inappropriate way for a student to either obtain something desired (e.g., attention, a tangible item) or avoid something not preferred (e.g., a task or activity). For example, the function of Cheralynn’s behavior was to avoid class work, and the factor that negatively reinforced the behavior was getting sent out of the classroom. An FBA should be considered when basic classroom interventions are ineffective and when the behavior:

Functional behavioral assessments have produced desired outcomes across a wide range of settings and student behaviors.

The S-Team members acknowledge that Joseph’s behaviors occur frequently and disrupt the learning environment. A review of his file indicates that Ms. Rollison had tried other appropriate interventions but with no success. At this point, they determine that an FBA is warranted. At Ms. Rollison’s school, education professionals such as behavior analysts, school counselors, and special educators are typically involved in the FBA process. At other schools, a different constellation of professionals might be involved. Regardless of who takes part in it, the process includes the following steps:

An expert in behavioral support. Professionals who have undergone rigorous credentialing requirements will have the initials BCBA (Board Certified Behavior Analyst) after their name.

A model or approach to instruction that provides increasingly intensive and individualized levels of support for academics (e.g., response to intervention or RTI) and for behavior (e.g., Positive Behavioral Interventions and Supports or PBIS).